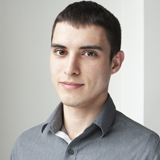 Rob graduated from Imperial College London last year and now works as a software engineer at Zuhlke. He has spoken previously at Zuhlke Days on array-oriented programming. He is enthusiastic about discussing and applying techniques for testing and test-driving software, with a view to safely tighten feedback loops during development. He worked with Giovanni on the Alexa skill prototype, whose development and resultant success form the topic of this talk.

Testing your Prototypes: What, Why, How
A common phrase associated with software prototypes is “quick and dirty”—meaning that not much thought is given to good design or, God forbid, testing.

In this talk we’ll present a different approach: the story of how we created a prototype for a moderately complex Amazon Alexa skill to manage bank accounts. We’ll describe how various levels of automated testing, and an attention to clean code allowed us to create a prototype, to be demoed to prospect customers, much more quickly that also works in a very reliable manner greatly reducing the chances of the “demo effect”—when the system works perfectly always except when demonstrated for an audience.