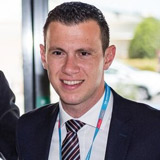 At MaltaEnterprise, Anthony has been tasked with supporting the Aviation and Digital Economy sectors including the Digital games and DLT streams.

Doing Business in Malta
This presentation explains how Malta has set up its financial infrastructure so as to enable Blockchain and crypto currencies to flourish.

Event will start in
Book Now