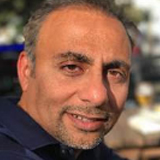 Humayun is the founder, backer and CEO of Fetch.AI. Fetch is a next-generation protocol, invented by leading AI experts, that enables a digital world where Autonomous Economic Agents can perform proactive economic activity. Fetch have built this protocol on the world’s first adaptive, self-organising ‘smart ledger’ which delivers unrivalled performance and scalability.

Fetch is the missing critical infrastructure for tomorrow’s digital economy, providing the tools for emerging and future marketplaces, where tasks, such delivering data or providing services, are rewarded with digital currency.

Humayun’s first venture bought an entirely new way of thinking to the steel recycling sector, building his company from start-up to £80m in four years. He was one of the first investors in DeepMind, having the vision to provide early-stage support to artificial intelligence & deep neural network technology.