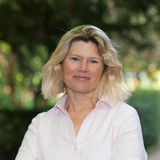 Over the past year, Margarete has worked with several leading businesses to support them as they transform digitally. Some of these organisations are digital leaders and some have been traditional businesses that have transformed their business models to become leaders in a digital age.

Previous to that, Margarete worked at EY where she led the digital strategy practice for two years. She previously worked for PwC in Australia, New Zealand, Hong Kong and more recently in Ireland. Margarete supported many public and private sector clients with their business transformations.

Today, Margarete works with a diverse group of businesses ranging from traditional established companies to new market disruptors. One of those companies is Dell Technologies where Margarete leads Dell’s digital strategy for the UK and Ireland supporting large enterprise accounts digitally transform.

Margarete is a keen supporter of diversity in digital and a strong advocate of STEM.

Keynote: The growing pains of Digital Leadership
Digital leadership requires a bold approach to leadership. Many leading organisations have struggled to really transform how to become leading digital businesses. Many are still struggling with digital front ends but antiquated analog middle and back office structures and decaying work practices. Some enlightened businesses who are not disruptors but have a legacy infrastructure and aging workforce are trying new and novel ways to transform their culture to embrace the digital age.

This session will touch on some of the highlights and low lights experienced by leading businesses and how they have responded to become leaders in a digital age.